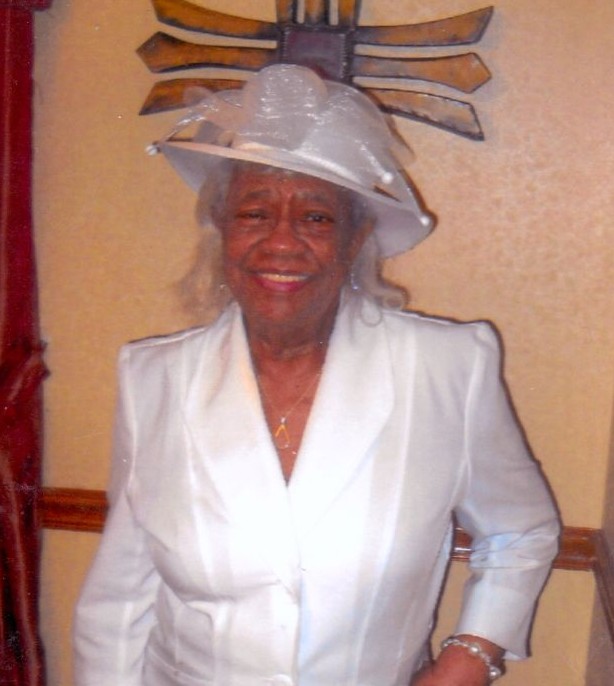 County), Tennessee. Born to the union of the late Robert Collins Sr. and Mary Hunter
Collins, she was one 8 siblings, all which whom have previously proceeded her in
death. She went from labor to reward on the afternoon of July 6, 2021, earning her
wings to take flight and rest with our heavenly father.
"Maydell", as she was affectionately known, began her early education in a one-room
schoolhouse, and attended through the sixth grade. As a child of sharecroppers, she,
(like most children of the Depression), was expected to work from a very early age.
Known for her storytelling, she would often say, " We had a hard life, but it was a good
life". From her earliest memory, Maydell set tobacco with her father Robert, behind a
mule driven plow. She was proud to boast that she was "Daddy's best field hand". She
often reminisced about how she worked in "white folks houses" ironing and cleaning all
day for a mere 25 cents, which of course was then given to her parents to help support
her family. Maydell professed her belief in Christ at a very early age. She joined Cabin
Row Missionary Baptist Church in Southside, where her Father was a Deacon, and
she was baptized in a creek! She was a faithful member until her family, (tired of the
grueling sharecropper's life), moved to Nashville for better opportunities, she was 13.
Little did she know that one of the men who helped move her family to Nashville, would
ultimately become her husband. Amos Bell Sr. a handsome suitor, immediately became
smitten with Maydell and likewise, she to him. He was eventually given permission to
properly court Maydell, only under the chaperoned supervision of her younger brother
"Bumpsey". They ultimately wed on November 3rd, 1945, and celebrated 50 years of
matrimony! Amos preceded her in death on January 31, 1995. Their union produced 3
children: Geraldine Collins, Barbara Dennis, and Amos Bell Jr. (Mae), who proceeded
her in death in 2013.

Amos and Maydell joined St. Mark Missionary Baptist Church, under Pastor Samuel H.
McCrary, a founding member of The Fairfield Four. Maydell was a member of the
Missionary Board, until 2003 when she then joined the Crystal Fountain Church, under
Dr. Michael V Graves. She was a faithful member until 2018, when she joined
True Praise M.B. Church, under Pastor Everette Benson, where she remained a
member until her passing.
Throughout her life, Maydell exemplified a strong work ethic, and was the embodiment
of a "Moses Mentality". She worked hard all of her life, to create a strong foundation for
her descendants and future generations. From being a healthcare professional, to
retiring as a Hospitality Supervisor with Capital Park Inn, she set the tone for the
importance of hard work, education, and most importantly, love of family.
Maydell LOVED her family, and was an avid storyteller. As the surviving Collins
Matriarch, she frequently gave words of wisdom, not only to her 5 generations, but to
the plethora of nieces and nephews, who relished her advice and counsel. She didn't
mince words, and was a feisty spitfire, who told it like it was! She was honest in her
observations, and was generous with her 96 years of discernment. She was a regal

woman who was socially conscious, relative to the segregation and injustices that she
lived through and survived. Although she spoke often of the atrocities of growing up
under Jim Crow, she never let it define or diminish her. She was a proud woman, who
maintained her dignity in her teachings to her family, who will carry out her legacy.
She leaves to cherish her memory, 2 daughters, Geraldine Collins and Barbara Dennis.
(7) Grandchildren: Devoted granddaughters, Donna C. Anderson (Gary) and Tanga
Gibson (Devoted Grandson-In-Law, Andre Gibson), and Kimberly Nelson. Grandsons,
Harold Dennis Jr. (Donna), and Michael Bell. Two grandsons, Anthony Bell and Craig
Eugene Bell, preceded her in death. 9 great-grandchildren: Briana Gibson, Chelsey
Anderson, Adam Anderson, Tori Nelson, Jordan Nelson, Trey Dennis, Kylee Dennis,
and Jasmine Barrick. (Jaylon C. Gibson - preceded her in death). 1 great- great
granddaughter, Anisa Jama, who was the joy of her heart! Devoted Nieces, Audrey
Minor, Lovella Hegwood, Ramona Wade, and Carolyn Garrett. Devoted Friends, Cheryl
Bryant and Ann Laura Chandler. A host of Nieces, Nephews, Cousins, and numerous
relatives and friends.

To order memorial trees or send flowers to the family in memory of Maydell Collins Bell, please visit our flower store.