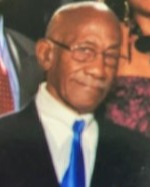 Rethel Smith was born on April 5, 1926 to the late John and Nellar Smith. Rethel passed away on January 7, 2023 and was married to the late Ada Lee Smith in 1946. Rethel was a devoted husband and father along with deceased wife who raised twelve children.

Rethel along with his family departed Florida and relocated to Neptune, NJ. After retiring from the Federal Government, Rethel Smith and Ada Smith relocated to Nashville, TN.

Rethel was baptized at the Church of Christ at Kings Lane, Nashville, TN. He was educated in the Florida school system. He was a World War II Seaman Second Class S and enlisted in the United States Navy in 1943 and was discharged March 18, 1946. He was employed in Orange Grove and construction. He retired from the United States Federal Government. His hobbies were gardening, painting, and traveling.

To order memorial trees or send flowers to the family in memory of Rethel Smith, please visit our flower store.

Church of Christ at Kings Lane

Church of Christ at Kings Lane